skip to main | skip to sidebar

She's the pinup queen of the new millenium. NYC's IT girl. Fun and fabulous and always at all the best places because wherever she is BECOMES the best place to be. She's von Hottie. You've spotted her at the slopes in St. Moritz, rocking a fake fur over her bathing suit. You've seen her strolling along the white sands of Miami Beach - how does she do that in heels??? Now, you can see her on Empire, where she's playing - what else? - her fabulous self...and sending the world of the Havens into a tailspin of scandal. How did the web soap score such a casting coup? I learned from none other than von Hottie, herself, who made time between public appearences to fill me in on her latest project. Fun-loving and full of laughter, I can't imagine anyone not being taken with her.

LN: First off, I have to tell you how much I love your work. You're the anti-Paris Hilton. What you do is just so fun and lovable.

vH: Good! Fun and lovable are exactly what von Hottie is supposed to be.

LN: I watched the video clip on your website - the one filmed at Coney Island. I loved it. For one thing, that's one of my favorite places in the world. But I also loved people's reactions to you.

vH: We filmed that for Current TV, and were also shooting pictures for the pinup calendar. It's funny - we were by the Freak Show, and I guess I expected them to be happy to have us there, maybe invite us in. The opposite was true. At first I felt bad, because the people on the boardwalk were all so into von Hottie. Then it occurred to me that they're in the freak business, and we were probably stepping all over their territory.

LN: When Sam (our mutual friend) sent me a message asking if I'd be interested in interviewing von Hottie, I thought for sure he was having me on. I think I told him I was holding out for an interview with Karen Black - I really thought he was joking.

vH: Sam and I were having cocktails and he said he had a friend who'd probably like to interview me. Next thing I knew he was tweeting away, and than taking our picture to send you.

LN: I demanded proof. I think I'll post that photo on my blog, if it's ok with you.

vH: Definitely post it! So many beautiful things happen over margaritas. 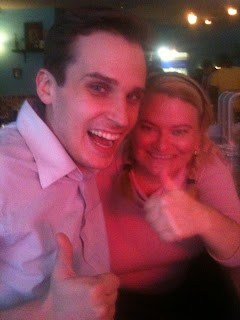 LN: So, I just watched the most recent episode of Empire, and it was a riot. How did you get involved with it?

vH: Brian Hewson (Empire's writer, along with Greg Turner) and I lived together a while back. Actually, Brian gave me cable. When we moved in together he couldn't believe I didn't have cable, and he had a whole list of shows that he regularly DVR'd, so he set me up with cable service. Once I got it, it was impossible to stop watching tv. I was also in a play that Greg wrote. Brian and Greg are more invested in their television viewing than anyone I've ever met. They're passionate about the programs they watch.

LN: Without giving anything away to people who haven't seen this episode, I'll just say that you end up in a compromising position at the end of the episode. Something we would never see on network television. How did that come about?

vH: Brian called to say that he was planning an epsisode that would end with a celebrity scandal, and he wondered if von Hottie could be the celebrity caught red-handed. I was definitely into it. There wasn't a script for that section yet, and Brian at first talked about the scandal being a celebrity caught snorting coke. I wasn't into that. Drug abuse isn't what von Hottie is about. So we worked on different ideas. Someone had the idea that von Hottie would be caught giving some guy a blow job, but that seemed like such a cliche'. It's been done to death. And then we realized that we had the perfect opportunity to do whatever we wanted to do. This is the internet - we can do things that won't ever get done on network television. We added the cut-out to make it into a sort of threesome, as a tongue-in-cheek commentary on the narcissism of self-made celebrity, and also an homage to Marilyn Monroe. She said something like, "Men want to go home with Marilyn, but they don't want to wake up next to Norma Jean."

LN: The cut-out is the funniest part of that scene, in my opinion. Was it fun to watch the episode, yourself?

vH: At the wrap party this past weekend they screened all of the episodes. It was bizarre because it went from high drama to bizarre comedy. I loved watching it with a bar full of people. When that last scene was over, this old, French guy at the bar leaned over and said, in a thick accent, "Good for you!" I think he wanted to invite me to the bathroom.

LN: Of course I noticed when you were first mentioned on Empire - I think it was the first episode of the season, and Orlagh Cassidy's character sees your column in a tabloid and refers to you as a hussy.

vH: They put my name on the front cover of the tabloid on the show, and then we actually did get into Soap Opera weekly, which was so exciting. 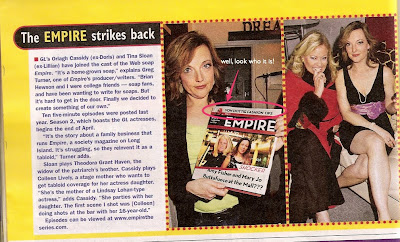 LN: Will we see more of you on Empire?

vH: I won't be acting in any more episodes this season, but my presense will definitely be felt. Of course, there might be a sort of Betty White effect, where the public demands more von Hottie in season 3.

LN: I may just have to start a Facebook group. How familiar were you with soap operas before getting involved with Empire? Had you ever watched?

vH: When I was in high school, I used to rush home to watch General Hospital with my stepmother. I loved it. That was during the Luke/Laura/ Lucky era. But then my favorite character, Stone, died of HIV, and I was inconsolable. I couldn't watch anymore.

LN: And you say Brian and Greg are the most invested television viewers you know?

vH: It's true, I've been pretty invested, too. The annual nurse's ball on General Hospital has been a great inspiration to me. I remember one birthday party, where I planned costume changes midway through. My stepmother thought it was a bit much, but I got the idea from the nurse's ball and I stuck with it.

LN: I'd almost forgotten the nurse's ball! My partner is a nurse - I'm pretty sure she'd throw up if I told her about the nurse's ball. You know, a hospital set is the one thing Empire doesn't have. Most soaps have some sort of medical story line. Maybe they need a hospital.

vH: Or they could just have a doctor. Maybe the guy who played Stone on General Hospital.

LN: You said before that you were excited when the scene with Orlagh made it into Soap Opera Weekly. I imagine you get recognized a lot on the street.

vH: I'd like to say it happens every day but, in reality, it's happened maybe five times. von Hottie is more about creating the illusion of global fame.

LN: And these days, that's completely possible. So many people who are famous are famous for no reason other than that they've decided to be famous.

vH: Yeah, and bringing it back to Empire, it's the same thing. Sort of like good, old American ingenuity. If someone like Brian and Greg wants to make a soap - they make a soap. I love that.

LN: Like this blog. I'm amazed when I write something and then find out that like 500 people have read it. I don't even know 500 people - but soap fans and bloggers are, for the most part, really nice and generous. They're cool about posting links to stuff they find on the web.

vH: Oh, that's really sweet, that you all watch out for each other. It seems there's this enormous community of soap fans who are losing the thing they love.

LN: I found out about Empire because Roger Newcomb at We Love Soaps  promoted it a lot. Once I watched it, the thing I liked about it right away was that it was clearly written by people who love soap opera. I almost get a sense of that "let's put on a show" spirit from a Judy Garland movie. Network soaps are dying, but guys like Brian and Greg are putting on their own show.

vH: Absolutely. And it's the internet, so they can have as much making out as they want!

LN: I know! I love it that we see Cain and his boyfriend making out just because that's what couples do.

vH: Television has had some stuff like that, shows like The L Word. But usually it's all dramatic and stuff. I love tht the gays on Empire just make out because it's what couples do. I appreciate the making out. Brian and Greg have these online viewer polls to find out what people want, and that's what they want - more making out.

LN: Which, believe it or not, is a big deal. Empire is sort of the little soap-opera-that-could, because they're doing what networks couldn't or wouldn't do. Even in 2010, soaps pretty much always flake out when it comes to showing gay couples. So, yeah, your friends are doing something really significant when they include all of that making out.

vH: Hopefully more people will produce more content like this that does stuff the television people won't do.

LN: I'm not going to take any more of your time, but we've got to have drinks next time I'm in NY.